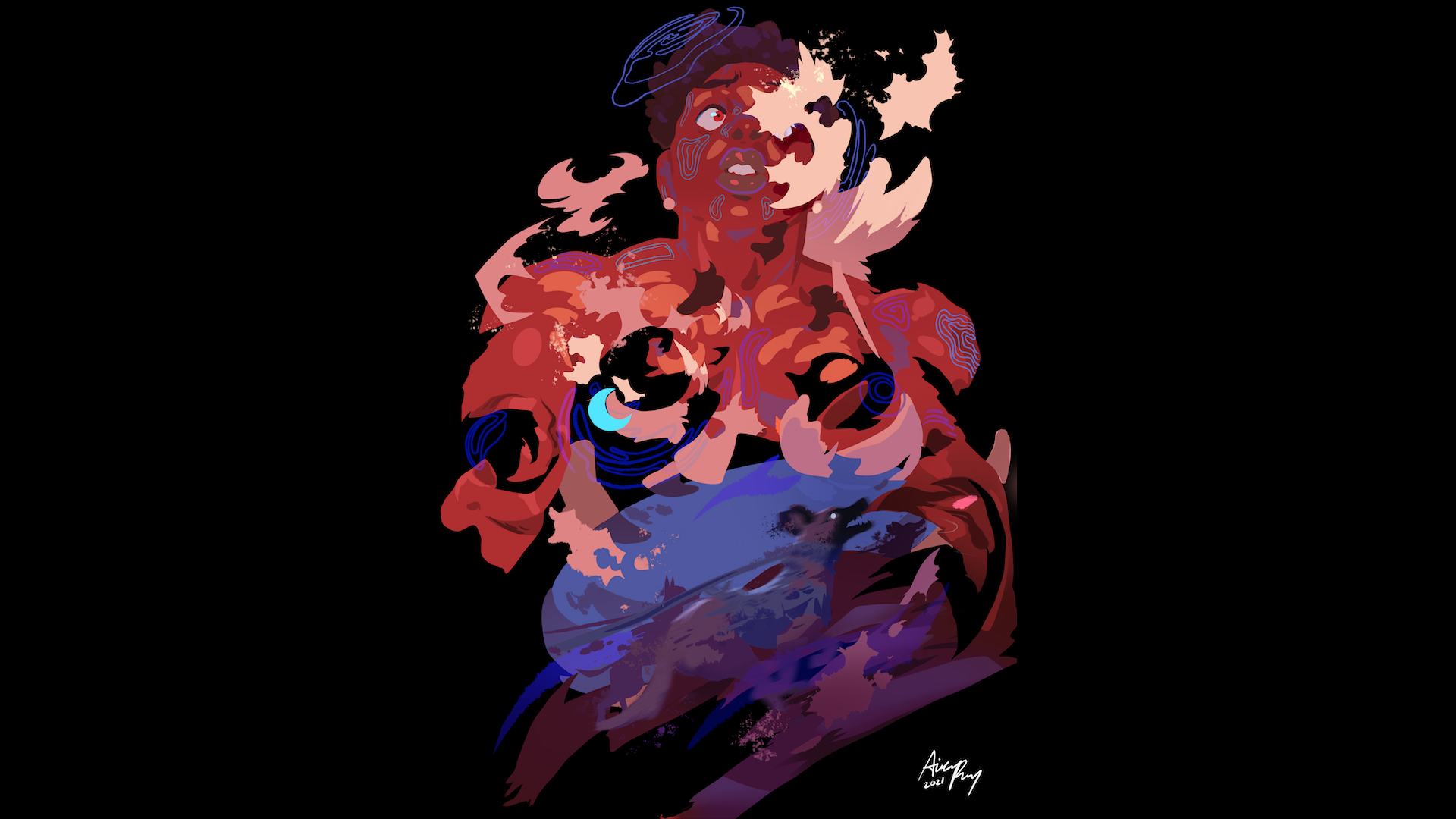 Jota Mombaça (Natal, Brazil, 1991) is an interdisciplinary artist whose work derives from poetry, critical theory and performance. The sonic and visual matter of words plays an important role in their practice, which often relates to anti-colonial critique and gender disobedience. Through performance, visionary fiction and situational strategies of knowledge production, they intend to rehearse the end of the world as we know it and the figuration of what comes after we dislodge the Modern-Colonial subject off its podium.

Aicy Ray is a multimedia artist of Guinean origin who creates multiple visual landscapes to explore the dimensions of the abinary body. Refusing labels or limiting gender definitions, she transposes the constant transformation of this body into graphic expression, breaking structures through elements such as line, mark, color. Besides having a degree in the field of Animation from the Multimedia Art programme of the Faculty of Fine Arts of the University of Lisbon, Ray has been producing several works in the fields of illustration, concept art, design and comics. Among these are creations like "À Luz da Voz", a short comic released in the anthology Silêncio in 2017 by The Lisbon Studio, or the collaboration with Congolese artist Sandra Mujinga in an animation project for the Munchmuseet (Munch Museum).

(…) I was lying on my back, on a sandbar, in a region of desert dunes between the ocean and the remains of an old Atlantic Rainforest Reserve.

After containing the vomit, I concentrated back on the arms, trying to extract from the paralysis, small movements of the finger, first. I knew I was not able to start running early enough to get away from there before being hit by the next siren; so I decided to dig. If I hid under the earth, the waves of terror would only stun some of my sensors, holding my ability to react without, however, paralyzing me.

At that moment, it was the patrol that scared me the most, so I let some of my tactile sensors focus on the vibration of the earth while the others worked to bring back to my body the ability to take action. As soon as the hands and forearms were released from the paralysis, I began to dig; the rest of the body loosened as I plunged into the dune.

I did not count how much time it took me to bury my whole body, but I sensed the sirens would come soon, and a second after closing the hole, it screamed indeed.

This one lasted longer than usual.

Even stunned by the effects of the wave, I dug as deep as I could, non-stop, plunging deep into the sandbar, hoping that my hormonal mark would not be captured by the patrol. I knew that with my body burning because of the extreme amount of biochemical changes I had been working on, my presence was detectable from afar by the new recognition system recently incorporated by the patrols.

And even though there, beneath the earth, I had some advantage, I would never be able to escape the occasional onslaughts of an entire patrol. In the state of the transition I was in, it was not yet possible for me to simply undo and spread my body through the earth. That’s why I rush to get deeper and deeper. (…) / Translation by Jéssica Oliveira e Bruna Barros